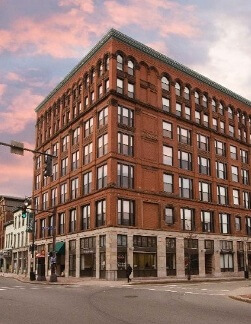 This was a project of major significance to the City of Portland because the building provides area residents with low-income housing options. The apartment complex had become so dilapidated that the quality of life for many of its residents was being seriously impaired. Many windows were in such a state of disrepair that they were either falling out, could not be opened, or were jammed open, allowing free entry of rain, wind, and snow.
The building’s hodgepodge brownstone banding was also failing, allowing substantial water infiltration. There were extensive areas of crumbling grout and brick, allowing moisture to seep unchecked into the building. The mortar joints were so seriously deteriorated that they’d begun falling out on their own, creating safety issues around the entire perimeter of the building. Because the structure had gone for so long without proper upkeep, signs of structural fatigue and additional safety concerns were markedly apparent upon inspection.

Working with the same owners and general contractor of the award-winning Old Woolen Mill project, the task was take the time-worn façade of a building of major historical significance and bring it back to life.
Hascall & Hall was hired by the building’s owner to cut out and repoint all of the mortar joints throughout the façade, while working to ensure that all the dramatically different exterior areas were as visually congruent as possible to one color. In addition to meeting the aesthetic requirements, we needed to structurally stabilize the façade where it showed signs of severe cracking, where the building’s steel structure lay directly behind the brick, and also to render the façade leak-free.
Hascall & Hall completed the project with brick removal, coating of the structural steel, and installation of façade anchors, as well as applying new brownstones at numerous locations across the building’s façade. Tuck-pointing was required over 100% of the building, covering over 100,000 square feet. Not only was the tuck-pointing completed throughout, but all of the bricks that were cracked, broken and spalled (broken into chips, fragments, or flakes) were replaced with new brick, closely matching the existing brick to present a seamless appearance.
The restoration also included cleaning and coating of the two elevations that were exposed to public view. Once this was accomplished, the final touch was to clean the entire exterior. All work was done to historical preservation standards. Upon completion the building was inspected and deemed leak-free. The entire project, which had to be completed within a one-year timeframe for contractual compliance, was finished the night before Christmas 2006.