Last year, a new sub-station was built to replace the original Engine Number 4 Station from the 1940s.

Hascall & Hall was called in to install an easy-to-clean, slip-resistant floor solution that was durable enough to keep up with the firefighters’ fast-paced environment.

The Lewiston Fire Department dates all the way back to the 1800s with its first station on Chapel Street in 1849. Before 1849, records show there were no firefighters, rather “fire wards” in the village.

During this era, there were no recorded descriptions or methods of firefighting. It is assumed that attempts to fight fire included sounding off an alarm by shouting “fire” and ringing church bells and calling all able-bodied men to the site of the blaze.

Often volunteer efforts were too vulnerable and unreliable to provide protection to the growing community and were eventually deemed ineffective. This led to the formation of the Lewiston Falls Village Corporation, a committee driven to maintain a good and efficient fire department within the limits of the corporation.

The Corporation was then authorized by state legislature to raise money for the purchase and maintenance of fire equipment, to erect and maintain engine houses and to construct reservoirs/aqueducts for readily available water supplies.

On October 30, 1849, the very first engine house in Lewiston opened its doors – Engine Company Androscoggin #1. It was stationed on Chapel Street with 57 members. Over the decades more station houses were erected, and the Lewiston Fire Department battled major fires and saved countless lives.

Hascall & Hall prepared to install a beautiful fire red floor with yellow striping in the apparatus bays that would not only proudly display those firefighter colors, but also withstand the test of time.

The Hascall & Hall team began by applying a base coat and broadcast aggregate into the wet material. 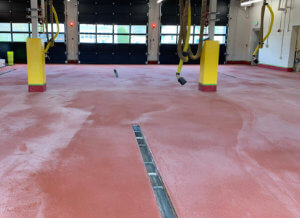 Once cured, another broadcast coat was applied as well as an additional round of gritty aggregate to ensure a slip-resistant surface. After the second curing period, we went with a grout coat to allow for extra durability, followed by a topcoat to give the floor the sheen this station was looking for. 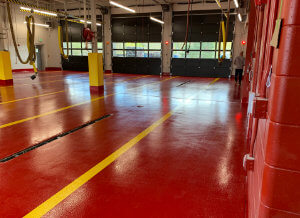 Once the final curing stage was complete, we finished by applying two 6” x 60’ yellow lines in all three apparatus bays to create lanes that efficiently guide fire engines in and out with ease.  Check out these before and after photos of the new and improved Engine Number 4 Station! 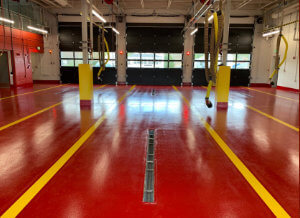